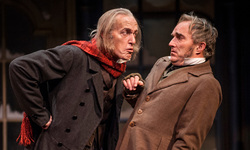 Ron played Bob Cratchit for eleven seasons, during which, he fathered more than forty children with 6 different Mrs. Cratchits.   Ron has left a permanent mark on The Goodman in the form of seat L8, which now bears his name on a brass plate, courtesy of a family of patrons (thank you to the Bergers), who were fans of his portrayal of Mr. Cratchit.  Next time you're in The Goodman's Albert Theatre, check out seat L8 on the main level.
L8.  Late Seating.
Promotional video for Goodman Theatre's 2013 Production of 'A Christmas Carol'.